This may be a two-year-old being aggressive with their older siblings, or a child in a two’s program hitting classmates. I tend to think there are three (long run, four) parts to the answer:

Coach the triggers – The first step to being able to coach triggers is to identify them. It may be helpful to keep notes about the aggressive behaviors for a few days, be sure to note what sparked the behavior. This might be being told, “no,” having to share toys, getting the wrong color cup or rough house play that went too far. Coaching out of the moment might be role playing related scenarios, giving puppet shows, drawing a picture of the situation going well, providing a visual cue or reading related children’s storybooks. Here is a post about coaching wanted behaviors. The goal of coaching is to encourage wanted behaviors over time.

It may be helpful to listen to my free online workshop on coaching wanted behaviors.

Discipline in the moment –

The fourth long run answer is coaching emotion language and empathy. I say long run because, two-year-olds aren’t expected to have much in the way of emotion language and tend to have a very limited sense of others. Since they are not well versed, it is good to include emotion language and impact on others in the moment. This would be, “I know you are frustrated. You wanted that toy.” and, “wow, your friend is sad. Grabbing his toy made him feel sad.” Out of the moment, helpful to coach these things as well.

With all of this, remember you are talking to a two-year-old. This means when you are coaching or disciplining you only get a few short sentences. 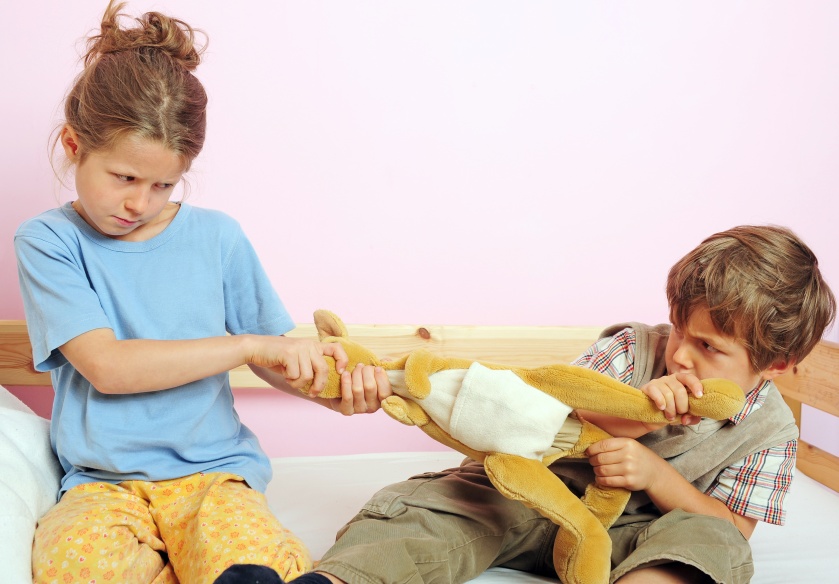 When children are arguing, a good first steps is often empathy all around. If my girls are arguing over a ball I might start with, “I know you are both frustrated, I could hear you from down the hall. You both want that toy.” This also teaches children to start with empathy which is often helpful.

Teach them to listen to each other’s words. This might be, “Did you hear your brother? He said, ‘stop.’ What does that mean to you?” or, “I heard her screaming. She clearly doesn’t like that.” You are reinforcing the other’s words to each child. Often, by the time children are arguing, they aren’t listening well.

If needed, teach them to speak up for themselves.  Many children are all over this one, they speak up for themselves quite well. If your child is on the quiet side, you might have to coax some words out of them or give them some words to say, so they can at least hold their own. You might follow this up with reinforcing their new words to the other. It can be helpful to teach your child to use an assertive voice in conflicts.

Once they feel understood or heard, the next step is to help them focus on solutions. You might ask them each to give an idea, or you might suggest a few ideas and discuss. You might teach them to weigh their options and negotiate together. The goal is to give them ways to find solutions and work through the issue together, rather than giving them the solution. This may take time and effort; it may take more empathy. It may also include taking a break and coming back to problem solving once children are calm.

If the problem solving process continues to be difficult, you might step back and coach them to be more flexible thinkers. These ideas for teaching flexible thinking are best done out of the moment, when all are calm.

Charting behaviors like tantrums or aggression is often done by teachers in the classroom, so they can quickly gain a better understanding of what is happening. It is something parents can easily do at home. Charting means keeping detailed and consistent notes about the behavior. If a child were tantruming often in my classroom or at home, I’d start a notebook and for every tantrum I’d jot down:

Once you’ve taken notes for several tantrums, you can look across the notes for patterns. If it’s always the same time of day, maybe move snack earlier or rearrange that time of the day. If it’s the same place or happening when interacting with the same children, look at how you can change the space or separate the children. Coach the triggers directly. If turn taking triggered your child’s tantrums, make a plan to coach turn taking later in the day by reading a story about taking turns, role play taking turns or give a puppet show about taking turns. The idea is to teach them how to better manage when the trigger happens. Use the cues to better intervene before future tantrums. For some children, a cue would be their voice going up a notch or getting really whiney before the tantrum starts. If you know the cue and know the tantrum is about to start, you can intervene just before with empathy, positive intent or choices to calm and distract away from the tantrum.

Here’s a helpful post about using triggers and cues to lessen tantrums.

By charting the behavior and reviewing your notes, you are in a much better place to address the tantrums.

Likewise, if a child were being aggressive often in my classroom or at home, I’d start a notebook and for every aggressive behavior I’d jot down:

Again, this information is meant to show patterns and give you a better chance to intervene and in the long run curb the aggression. If it’s a particular time, place or person, make changes accordingly. Triggers are what sets off the behavior, and cues are signs it’s about to happen. Children who are aggressive often tend to have fairly consistent triggers and cues. You can coach the triggers, and intervene on the cues.

A few years ago, I got a phone call from a preschool. They had a two-year-old girl who was biting people often. My first questions included, “who is she biting? Where is she biting? And, when is she biting?” and, “did you notice any triggers or cues?” The answers were all, “good question.” So they took notes for a week. When we spoke again they said, “We can see it coming. She only bites people if they approach her, and she is holding stuff.” It’s a don’t touch my stuff bite. Knowing that, the teachers can focus on teaching her to say “stop,” or “mine,” when others approach. They can have her sit down, or just stay within arms reach when they see her holding stuff. They also noticed consistent cues. They said, “she gets this wild look in her eye, her mouth flies open, and then she lunges.” Scary as that is, the wild look gives them a few second to remind her to say “mine,” or hold her or say “freeze,” or say “run,” to the other child.

Here is a helpful post about discipline for aggression.

The steps of positive discipline provide parents with a framework for moving through any discipline exchange. For most all behaviors, the idea is to work forward through the steps and consider which are needed or are the best fit. I tend to get through most discipline exchanges with empathy and choices or positive intent and choices, but that may not be what fits best for you. It is good to stay flexible.

It is also helpful to note that there are several ways to stay in front of this discipline including: considering logistics for ways to solve behaviors, checking your routines and schedules to avoid struggles, and giving clear and consistent warnings to help children prepare themselves. There are also proactive discipline techniques such as giving positive directions and descriptive praise to encourage wanted behaviors and lessen the need for the steps of discipline. That said, sometimes the behaviors still happen.

Here are the steps with definitions of each. For each step, I am providing an example for this scenario: Your child wants to walk at the grocery store but keeps pulling things off the shelf onto the floor.

As a parent, when one child hurts another, I tend to work through the steps backwards and start with a logical negative consequence. This is mostly because I want it to register differently to my child. I want them to realize, “oh, when I hurt someone this all works differently.” The only way for it to register this way is to work forward for all other behaviors and avoid starting with negative consequences unless there is aggression.

If aggression is happening often, it can be helpful to also coach being gentle or other related skills out of the moment. Coaching might include reading stories like Hands Are Not for Hitting by Aggasi and No More Hitting for Little Hamster by Ford. This might be brainstorming ways to be gentle, practicing gentle touches and making lists about how to treat people. It’s good to also coach any known triggers. If you child is hitting over taking turns, coach how to take turns by role playing, giving puppet shows, drawing pictures of it going well and drawing comics that teach the point. There is a free audio workshop on coaching wanted behaviors available at parentingbydrrene.com.

To learn more about this and other discipline techniques you can join me for a workshop in Northern VA.

Listen to my audio workshops online.

Or read my workbook: 8 Weeks to Positive Discipline.