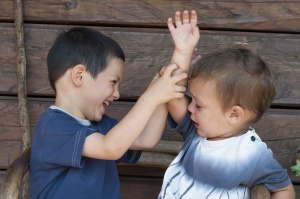 It’s one thing to know positive discipline. It’s a whole other thing to apply this language consistently when there are siblings involved. With school letting out, families are likely to be spending more time together. Here are a few discipline rules between siblings to help for a smooth summer:

There are a few good parenting books on sibling issues.

There are several good children’s books on sibling issues.